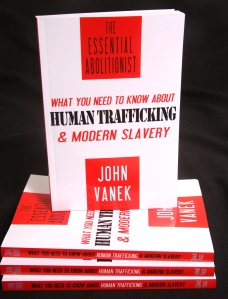 With The Essential Abolitionist: What you need to know about human trafficking & modern slavery now on sale, I’m often asked about the writing and publishing process. Most often, I’m asked, where did I get the idea to write the book? This is the short story behind the book.

Since 2006 I’ve been involved in the response to human trafficking when I was tasked with managing the San Jose Police Department’s Human Trafficking Task Force. We were part of a nationwide program of task forces funded by the U.S. Department of Justice. When the program was launched in late-2005 it was the first effort to create and sustain multi-sector task forces involving local law enforcement, federal law enforcement, and NGOs (non-governmental organizations) who provide services to victims of human trafficking. Being a brand new effort, each of the task forces was left to design their own plan to achieve the program’s four goals: Identify and rescue victims of trafficking; prosecute offenders; train local law enforcement, and; raise public awareness.

Our task force launched an aggressive campaign of educating the public (mostly by speaking at public events), and creating training programs for law enforcement and victim services providers. So from the start we were being asked lots of questions about human trafficking and how best to respond.

For me, this led to more and more opportunities to speak, train, and advise, usually with partners from other anti-trafficking sectors. What I began to realize over time was that people were usually asking the same questions, regardless if they were the general public, students, community activists, or even professionals with a role in the response to human trafficking.

About two years ago the idea came to me that the most-often asked questions could be condensed into a book, written in a style any reader would find engaging and valuable. What would set this book apart from many of the other excellent books focusing on human trafficking would be my experience putting this knowledge to work, and my experience helping other organizations enhance their response efforts. The book would focus on real-world challenges faced every day by those actively responding to modern slavery. After drafting an initial list of about 100 questions, I asked several colleagues their opinion of the book’s concept and the draft questions. I received enthusiastic feedback about the potential value of the concept, and most of my colleagues told me that they were routinely asked the same questions!

HOW TO MAKE THE BOOK EVEN BETTER?

So, again, I reached out to colleagues from across the country, each with expertise in their own area of responding to human trafficking. I will always be grateful that every contributor I invited to join me on the project quickly agreed. How much better is the book than if I had written it alone? It is immensely better! The contributors come from almost every sector involved in the response to trafficking. And though some of their topics seem focused on a particular sector, they crafted their contributions in such a way that every reader can gain knowledge, and a better understanding of the challenges faced by all. You can read the biographies of the contributors here.

The writing and editing process reduced the original list of 100 questions to 78; each a topic of value to anyone interested or involved in the response to human trafficking. The questions address the essential knowledge we should all possess.

So now you know the story behind the book!

Let me know what questions you have about the book, the writing process, or human trafficking in general. I’ll try to answer them in the comments or in a future blog post! 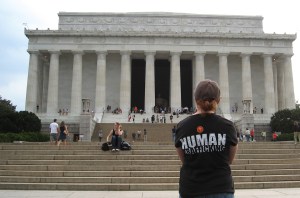 trafficking community, this word is troublesome for many, well, abolitionists.

The use of the word “abolitionist” is alarming to some who see the word as either implying a religious connotation to their stance against slavery, or they link the word with an entirely different subject; the abolition of prostitution. While writing my book The Essential Abolitionist: What you need to know about human trafficking and modern slavery, I have been questioned about my use of the word, and in the past have met many individuals who–thought deeply committed in the fight against slavery–prefer to avoid being labeled an abolitionist.

A search of several dictionaries repeatedly offer the same definitions of “abolitionist:” someone who is opposed to a law or practice, or someone who opposes (or opposed) slavery.

While the first definition can be applied to someone supporting the abolition of prostitution, this linkage doesn’t appear in several dictionaries I examined. Neither does a link between religion and abolition appear. So what is the source of this confusion?

During the American debate on slavery in the decades leading to the Civil War, many abolitionists used Christian values and Bible verses to support their stance. At the same time, there were self-described abolitionists who based their arguments against slavery on constitutional grounds, or moral grounds without invoking religious beliefs. Both secular and spiritual abolitionists fought to end slavery then, just as both sectors do so today.

The linking of the word “abolitionist” to the abolition of prostitution appears mostly in academic circles, where a mutual understanding among those discussing the topic exists. A web search of these words together will lead to articles on this subject. Coincidentally, those who have asked me if my use of the word implies a stance on prostitution have always come from the academic sector. This is a narrow use of the term, and one not usually recognized by the pubic.

In my book I address the question, What is a “modern-day abolitionist”? Today’s forms of slavery–and its victims–differ from the slavery of the antebellum United States. Today we address two broad forms of trafficking (labor and commercial sex), while also recognizing the many types of victims; women, children, men, persons of color, domestic and foreign national, native populations, persons with disabilities, LGBTQ, and others.

Today’s abolitionist is opposed to all forms of slavery, and seeks justice for all victims. It is actually pretty simple: If you oppose slavery, the best term to describe yourself is “abolitionist.” Be comfortable using the word, because it is a good–and the proper–word. I’m an abolitionist, are you?

Okay, those who are enslaving over 21 million people worldwide don’t oppose it, but assuming the vast majority of people do oppose human trafficking and modern slavery, you might think that fighting slavery would be fairly straight forward. But it isn’t. In fact, it can be quite difficult and frustrating. The United States Congress passed the Trafficking Victims Protection Act (TVPA) 15 years ago, making profound changes in how human trafficking is viewed and defined; how victims of trafficking are perceived, served, and assisted as they adapt from being victims of slavery to survivors; and how law enforcement agencies should respond to trafficking. Yet, those who have been involved in the fight against trafficking for years, and those new to the fight, experience frustration that so little seems to have improved since 2000. So why is fighting slavery do difficult?

First, modern slavery isn’t the slavery of old. It does not fit the traditional American view of slavery that was black and white – both in the literal sense, and in the moral sense where slavery was either accepted or reviled. The 13th Amendment may have outlawed slavery in the United States, but it did not abolish enslavement either domestically nor globally. In the modern slavery, victim and enslaver (or trafficker) more typically look alike, sound alike, and share Geo-cultural backgrounds. In addition, the slavery of old is understood by most Americans as either field labor or domestic service – images cast in school books and movies. The exploitation of today is limited only by the imagination and coercive skill of the trafficker: Once a trafficker determines how to profit from another person’s labor, they need only determine how best to make their victim perform that labor  through the use of force, fraud, or coercion. (In the commercial sex trade, engaging in sex is the labor.) In short, the whys and hows of modern slavery are far more complex than in the past.

Second, in this new paradigm of slavery, most slaves do not view themselves as slaves! (In a decade of anti-trafficking work I recall only one case in which a man walked into a police department and said, “I need help. I’m a victim of human trafficking.”) Victims engaged in forced commercial sex often do so because their “boyfriend,” who “loves them,” doesn’t have a job and the only way to eat and have a roof over their heads is by her engaging in sex several times a day.

Globally, 68% of human trafficking victims are exploited through forced labor or services, not the sex trade. Many are, more accurately, victims of debt-bondage, paying off a debt owed to their enslaver – often with unpayable interest rates – and either unable to leave for lack of better job opportunities, or afraid to leave due to threats of violence to the victim or their family. Foreign nationals trafficked within the United States often believe deportation awaits them if they come forward but, in fact, the TVPA offers protection to foreign national trafficking victims. Victims, lacking this understanding, are afraid to report their victimization for fear of law enforcement viewing them as criminals. Also, cultural norms often dictate a debt must be repaid no matter the conditions of repayment; another tool of coercion traffickers utilize. Not surprisingly, few victims of trafficking self-identify, adding another element of complexity.

The complexities of the new slavery, and how victims often perceive themselves, exponentially increase the complexity of responding to human trafficking. No single agency or professional sector (e.g., law enforcement, victim services providers, community organizations) can respond to trafficking alone and be effective in mitigating modern slavery. The “4 P Paradigm” is a model recommended for the comprehensive response to slavery and consists of Prevention, Protection, Prosecution, and Partnership. The first three Ps bring their own challenges, but the fourth is most daunting of them all. Collaboration among various agencies and organizations, each involved in different Ps, requires patience and humility on the part of the individuals involved, and long-term commitment from the leadership of the various organizations involved. Effective Partnership requires both institutional commitment, as well as specific skills and traits on the part of the individuals doing the collaborative work. Often, the person chosen to engage in this collaborative work doesn’t yet possess basic knowledge on aspects of trafficking and the response critical for their success, so training is a never-ending process. And, unfortunately, institutional leadership often sees the fight against slavery as merely the latest topic of community interest to be leveraged for political gain.

The struggles of fighting slavery go beyond these three, and each of the topics addressed could merit their own book! But while it may appear to some that little has changed since passage of the TVPA, the truth is far more encouraging. A decade ago friends asked, “What’s human trafficking?” when they learned of my work with a human trafficking task force. Today,  a more likely response is, “Tell me more,” as people are familiar with the term – if not the complexities. Today, more law enforcement officers have been trained; more prosecutions occur; more victims have more agencies and shelters ready to serve them; more communities cry out to help victims within their home towns. Colleges and universities offer courses addressing human trafficking and other social justice issues. Much good work has been done!

But the work continues, and part of the work in fighting slavery includes continuing to learn how to best do the work of fighting slavery. Understanding – and embracing – the complexity is the first step, and the second, and the third… Right now, 21 million people are enslaved worldwide. And they are awaiting our response.

Archive of Past Posts